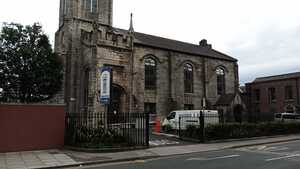 Years ago when we were doing the early startups, and I was still living at home, we had a strange office in a converted church. In those days, there were laptops but they were underpowered and dreadfully expensive. So you carried around a big metal box, they even developed carrying handles and straps for the short-lived fad of LAN parties [1].

Anyway, around this time we were working on some crazy contract [2]. We were shipping ourselves backwards and forwards from our homes to this office, and lugging these big computer boxes around. To that end, I ordered a taxi one day and it showed up fast.

It was a beat up car and the driver was scruffy looking. Unclean, scraggy hair, wiry. This is not so bad, many people have that look. However, the beat up car also had a beat up boot. It was full of dirt and had loose tool parts floating around in it. I was hesitant to put a PC in there, even though it was encased in metal [3]. But I did.

As we were zipping about, I was mindful of the stuff in the boot sliding all over the place and whacking into the PC. It was already a short journey but this guy was determined to make it shorter. He drove the wrong way up a street, cut across lanes, he would swing the car into any space that might take it. I was probably hungover, or tired from an all-nighter, I wasn't enthusiastic about any of this. He was giving out about cars as he cut them off, chattering a lot. He talked about rat-runs, shortcuts.

He talked about shortcuts nobody knew about, and as he did, he pulled off the road into an abandoned building site. I was astonished that such a desolate place existed just yards away from a busy city street, but all of a sudden we were in it. The car rolled over rocks and everything thumped around - he had to slow down, and so he slowed right down and started crawling. I felt liquid fear. This was real and it might be a very decisive encounter.

I put one hand on the release for the seatbelt, and another on the catch for the door and I was ready at the first to spring out of the car. Did he notice me doing this? I remember him being amused perhaps, but he said nothing. I had already decided to abandon my PC, that was no small thing at the time. But it's quite a thing to jump out of a car, and you don’t want to pull the trigger until you know for sure.

We emerged back out into main traffic, and the moment evaporated. That abandoned place might not even exist any more, it may have only existed there and then.

Sure enough, we got there just as fast as it was possible to do it. The PC was fine, and so was I.

[1] I remember a friend had a PC case lashed to his back with straps ripped off a rucksack, that sort of thing.

[2] It may have been a doomed 3D visualisation project (our first and last) which was utterly impossible.

[3] This was a big hulking 'server tower' case, with a kind of teal paint job. Some of the drive plates at the front were missing so you could see into the void (there was a tiny desktop PC fit-out inside).